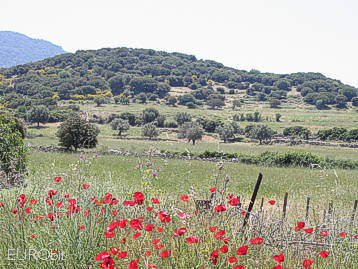 GEOGRAPHICAL FEATURES
The island is located in the Eastern Aegean and is approximately 180 miles in distance from Athens. It has an area of 1630 km2, is 70 km long and 45 km wide with a stretching coastline of 320 km.
It is the third largest island in Greece following Crete and Evia respectively. It has a population of approximately 100,000.

GEOPHYSICAL FEATURES
The greatest part of the island proves a thriving ground for olive groves, while pine forests occupy a large area in the centre. In the west the landscape is more ascetic, scattered with acorns and rocky mountain ranges. The two gulfs, Geras and Kallonis, add to Lesvos’ distinctive shape.

There are small but fertile plains in the regions of Kallonis, Geras, Ippios and Eressos. Small valleys and springs, mountain ranges and beaches – both sandy and pebble, conveying an image of island and mainland at the same time, form a landscape which at every turn resounds with the Aegean, with Greece. 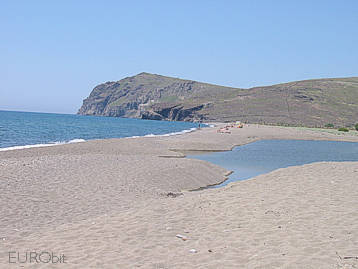 The “eco-tourist paths” lead a traveller on a course of discovery into the uniqueness of the Lesvian landscape and the aesthetic pleasure of contact with the beauty of Lesvos’ natural environment. Amongst the most interesting features a traveller can discover trekking through Lesvos, include Mt. Olympus with its unique ecosystem that one rarely sees on islands. A hiker can follow any one of the many forest paths that start from the scenic town of Agiasso, cross through the mountainous mass of Olympus and end up on the southern side of the island, at Plomarri or Vateron beach in the Municipality of Polychnitou.

Along the way, one will come upon picturesque villages at which to rest, points of breathtaking view, charming cafes and little churches, refreshing deep springs and an rich abundance of rare plants and wild flowers.

The Geras and Kallonis gulfs are home to two unique wet habitats that are vital for maintaining bio-diversity in the whole of Europe. Many rare species of bird flock to these areas and can be the object of bird watching particularly in the Spring and Autumn.

No-one should forget the myriad of interesting caves or the abundance of hot-springs throughout the island (at Polichnitos – Lisvorri – Argenos – Eftalou- Therma Geras Gulf- Thermi).

The Fossilised Forest and volcanic structures located in Western Lesvos, are singular destinations in themselves and of great interest.

THE COURSE OF LAVA 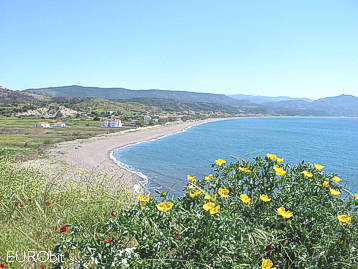 One million years ago a rich vegetation with huge age-old trees, some of whose trunks spanned 8.5m, covered the entire area. The intense volcanic activity of Ordymnou however, led to the barrenness of the area and its fossilised plant inhabitants.

Today this phenomenon is awe-inspiring, due mainly to the colours of the fossils. No description and no other means that an on-the-spot visit can suffice in revealing the true wonder, the beauty and strange attraction that the fossilised forest evokes. There is also an underwater section of the fossilised forest, at Sigri, but which has not yet been made use of, for mass visits. 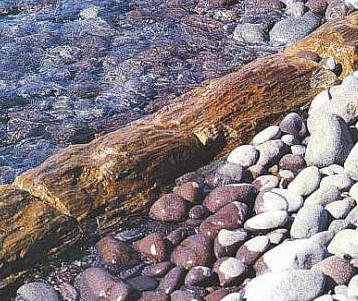 Apart from the fossils, there is also the rugged beauty of the earth to admire, once covered by dense, tropical forest, the appeal of an earth harshly eroded and parched and yet comprising another face of Lesvos with its own entranced, annual “pilgrims”.