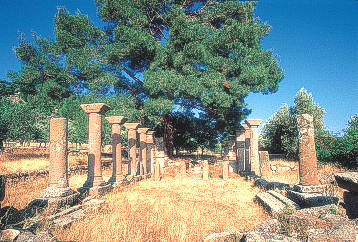 Prehistoric finds testify to human presence on the island which dates back to approximately 3300 B.C. Based on pre-history, the first island dweller was Makaras, who according to one version was referred to as son of the Sun, while in another as son of the hero Krinakos and grandson of Zeus. Many of the island’s towns bear the names of

Makaras’ children (Antissa, Arisvi, Mithymna, Eressos).
Makaras’ dynasty endured in Lesvos until the Defkalion floods, following which the island was deserted.
The beauty and skilled hand of the women of Lesvos is extolled by Homer and plays a catalytic role in the events of the Iliad.

It was in such a manner that Achilles, during one of his many raids of the island, captured the beautiful Vrissiida, who later provoked the feud between himself and Agamemnon. It is said that Achilles conquered Mithymna with the help of the king’s daughter, Pissidiki, who had fallen in love with him. 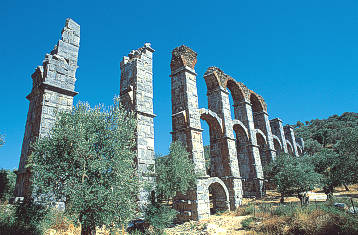 The sacred ground of Apollo stood on Mt. Lepetymnos and the island’s inhabitants, especially revered him and his sister Artemis. It is said that the Homeric Palamidis, the founder of letters and numbers, is buried at the foot of the mountain.
The first of the island’s inhabitants steered closer towards maritime activities and less towards agriculture, despite being at the stage of processing metal and having built impressive dwelling facilities. Small, organised cities existed, with oblong houses made of stone and influenced by the architecture along the Trojan coast.

During the 10th century BC, the Aeolians settle here under the rule of Penthelidon, who is ultimately killed in 659 BC by the tyrannicide, Megaklis. The protracted friction between Mithymna and Mytilini ceases, when Pittakos, one of the Seven Wise Men of antiquity, institutes the rule of peace on the island and leads the area to trade prosperity and important cultural achievements. Poetry flourishes at the hands of Sappho from Eresso and Alkeo from Mytilini, both from aristocratic backgrounds and in opposition to Pittakos. In 527 BC, according to Herodotus, Lesvos fell under the rule of the Persians and was ultimately liberated in 479 BC, where it proceeded to join the Athenian alliance.

In 428 BC, a short while following the start of the Peloponnesian War, Mytilini seeks to join forces with Sparta, but is betrayed by Mithymna. Thucydides documents the disputes between Athenians over imposition of the death penalty on all citizens of Mytilini. At the last moment the harsh decision is withdrawn and Mytilini is saved from complete annihilation. With the final, however, Athenian defeat, Lesvos temporarily passes to the realm of Spartan influence. 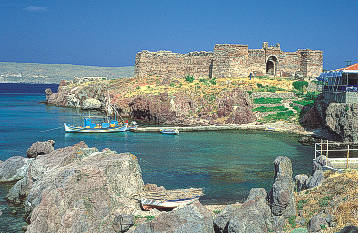 For two centuries it undergoes constant changes in sovereign: the Persians, Macedonians, Ptolemaiki and finally, Mithridatis, king of Pondos who forcefully withstood roman expansionism in the eastern Mediterranean. When he is ousted by western Asia Minor (approximately 80 BC), Lesvos accedes without condition to the roman empire.

Centuries of political instability and foreign domination do not sever the intense cultural activity taking place on the island. In the middle of the 4th century BC, the Athenian orator Isocrates, writes in a letter addressed to the noblemen of Mytilini that “your city, by public admission, stands apart in all dimensions of cultural life and has given birth to all celebrated artists”. A little later, the philosopher Aristotle and his pupil and successor Theophrastos, born in Eressos, settle on the island. The philosopher Epikouros lectures on Mytilini, while St. Paul travels through there on one of his missions. Following the predominance of Christianity as the official religion of the roman state (313 AD), many basilicas are constructed (more than 80 can be traced today).

Peace and security on the island is disrupted during the reign of Ioustinianos, when during the year 538 AD, vandal prisoners held by General Velissarios rebel in Lesvos and escape to Africa. The rise of Islam and Arab expeditions during the 7th century AD results in momentous change to the entire Mediterranean region. Enemy fleets sail across the Aegean plundering and raiding the islands. The Arab conquest of Crete in 828 AD led to successive destructive raids, ending only with the Byzantine restoration of Megalonissi in 961 AD. 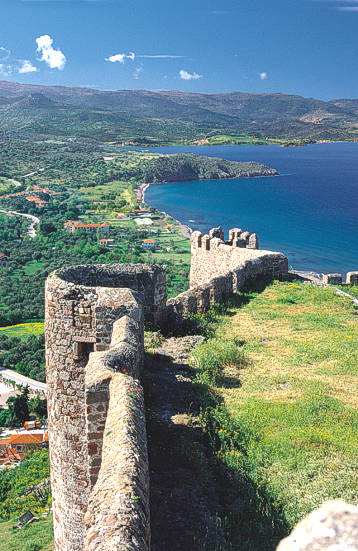 The Byzantines use Lesvos as a place of exile (e.g. Empress Irini, vanquished of title, in 802 AD and would-be emperor Constantine the Monomachos in 1035). In the 11th century AD, the island elevates the great poet Christoforos of Mytilini who is active in Constantinople and honoured with high office. With the decline of the Byzantine state, Lesvos is constantly attacked by the Turks, Venetians, Saracens and Catalans.

Finally, in 1355, the emperor cedes the island to the Genovese family, the Gatelouzon, who administer the island with great efficiency and leniency for one century and build the castle of Mytilini which still stands today. In 1462, following a bloody siege, the Turks took the island, and despite valiant attempts for liberation during the Greek Revolution of 1821, Lesvos remained in their hands until 1912.

Many foreign travellers visited Turkish-occupied Lesvos. Their works are testimony of a continuing Greek presence on the island and shed light on the life of the islanders during an otherwise dark period, endured for centuries.

On 8 November 1912, Admiral Koundouriotis with a force from the Greek fleet retook the city of Mytilini and a month later the Greek victory was sealed following bloody battle, when Lesvos was finally and unconditionally liberated. Following the Asia Minor catastrophe of 1922, almost 24,000 refugees settled permanently on the island. Lesvos bore witness to one more period of occupation during the Second World War, when German troops took the island in 1941. The occupation lasted until 1944.